On a single day in March last year, three countries — Tanzania, Kenya and Mozambique announced discoveries of oil and gas (joining Uganda as possible oil and gas producers.) This was momentous, and according to this article in The East African, there are several major infrastructure projects in the East African region that are unprecedented. With all these projects in the region the question of transparency and engagement with citizens affected comes up.
Why care about transparency in the extractives industry? First and foremost, the numbers. In Charmain Gooch’s TED talk she observed:

The Africa Progress Panel led by Kofi Annan has estimated that the DRC has lost around $1.3 billion as a result, almost twice its annual health and education budget combined.
It’s this flow of money away from the citizens of resource-rich countries that makes corruption so high-stakes. Gooch presents a slide showing how in 2011, natural resource exports outweighed aid flows by nearly 19-to-1 in Africa, Asia and Latin America. That’s a lot of potential hospitals, schools, universities and business start-ups that will never materialize, she says. “That money has simply been stolen away.”

With the recent discoveries of oil, gas and minerals in the East African region do we want that statement (and that incredible ration 19-to-1!) to be true in the coming years, or what can be done differently to ensure that there is transparency that leads to accountability in the extractives sector?

I would be remiss if i did not temper this statement with an observation from Chris Blattman on corruption. That it is an Anglo-American fetish and that Westerners care about corruption far out of proportion to its impact on poverty alleviation and economic growth. More importantly in the context of this post is this statement:

i would still argue, moreover, that if outsiders want to promote prosperity, or get out of a bad equilibria, far better to talk about term limits and strengthening political parties and parliaments. People in poor countries hate corruption too, and will eventually take care of it if they have the means to mobilize and exercise voice, and hold leaders accountable. Outsiders can’t do much about that, but if they speak loudly and consistently on the subject I think they strengthen the people’s hand.

The question I have, is what can the technology community do? The means to mobilize and exercise voice are freely available to us with tools like Ushahidi, SMSsync, FrontlineSMS and others. 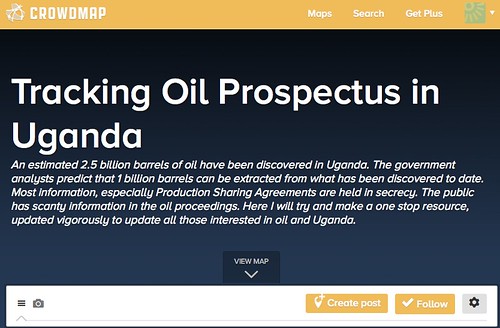 What role can technology play?

Can platforms be used to report corruption close to the location of where it occurs? Are there secure ways BRCK + VPN = A secure blackbox for reporting corruption?

Create a feedback loop with affected community e.g Turkana people in Northern Kenya reporting via SMS about how their community is affected (positively/negatively) I am reminded of the recent announcement by Refugees United, working with Safaricom to launch a helpline for refugees to find lost family.

Could a helpline for affected community in mining areas be a way to not only provide a channel for participation, mobilize and give voice to the concerns of citizens?

Could Crowdmaps like the one tracking Ugandan oil industry prospectus be useful in keeping citizens informed of available information? Can these maps be simple clearing houses of information (the verification mechanism could be more difficult but with collaboration amongst transparency organizations, it is not a far fetched idea)

There is a great series on our blog about Anti-Corruption and transparency mapping: What can we learn and implement in our various countries?

Recent news about the signing of The Open Data Charter point to another avenue for action. What sorts of data sets should be available to help shed light on the extractives industry. Which companies are transparent about the agreements they have put in place with governments, counties, and community? If positive action is being made, are we applauding those companies and shaming the ones engaging in corrupt practices?

Lets have a look at Kenya (Home of Ushahidi, Mpesa, BRCK and Kenyan transparency Champion John Githongo). There are several local organizations working on issues in the extractives industry. Not necessarily the technology bit, but the gamut of concerns.Below are are a few resources, though it appears that there is more to learn and certainly more to do in this regard. If you have more resources and links, please do share in the comments and if you’d like to partner with us, do let us know how we can be of assistance to help answer the above questions.

1. Open Governance in the Extractive sector – Africa. This is in development phase. They would like to create a platform for dialogue and a framework for engagement. (Do let us know how we can help at Ushahidi)
2. Institute for Human Rights and Business – This appears to be trying to influence the decision makers at the UN level. Would be good to know more about how human rights violations are reported and if there is a role for tech and dynamic data collection to feed into the reports.
3. Kenya Mining Licences Map! This is great. Certainly applauding the work of Majala and Kenya’s Ministry of Mining for putting this together. Check it out, dig into the data. 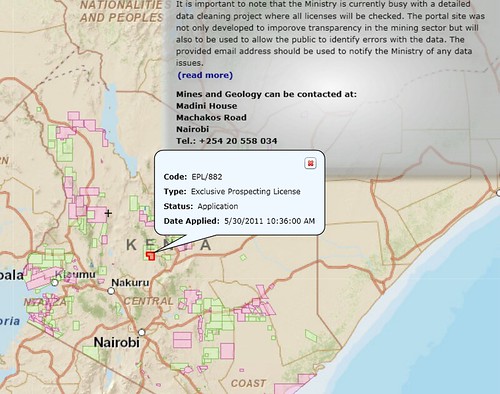 Many thanks to Charles Wanguhu of AfriCog, Majala Mlagui of Thamani Gems and John Githongo for the inspiration.

In the case of Kenya, fibre has been laid by companies such as Kenya Data Networks for communication within the country. The problem has been connecting Kenya to the rest of the world. That is where the bottleneck has been. The government of Kenya has been laying cable in many parts of the country, so is just a matter of time before high speed internet access is made available to urban areas and even smaller towns.

Do note the VSAT connections can have broadband-like speeds, so what we should look at is the connection costs and amount of bandwidth available.
For example, an E1 line (equivalent to the American T1) of 2 Mbps to ISPs costs 4000 USD in Ghana, Benin, Nigeria, 7000 USD in Kenya, Tanzania and Uganda, 32,000 USD in Cameroon, 25,000 USD in SA.

In residential access Telkom Orange charges about 5990 Ksh (approx. 75 dollars) for home access line of 256 kpbs downloads and 128 kpbs uploads per month. Many people use the Huawei wireless modems E220, E160 particularly in Nairobi with the 3G connections, utilizing a pay-as-you-go plan. Kenyan readers, how much do you pay for your internet access? what kind of speed do you get? Do you have a preferred service provider?

By and large, broadband access is very expensive. There are also other projects like TEAMS and EASSY (Quasi-Govt. consortium: Telkom Kenya/Orange is a member, as is Safaricom and Econet) that plan to connect parts of Africa to the rest of the world by Fibre optic Cable. So far SEACOM has arrived first and the prospect of having more competition could result in the cost coming down. Though that may indeed take time. For now, companies herald the arrival of SEACOM’s fibre optic line because it would mean an increase in productivity for businesses that depend on the internet. For example, there is a young businessman in Nairobi with an IT outsourcing company, with his relatively decent connection, he still has to wait for more than 5 minutes to download a 26MB file. In a few months with the SEACOM cable reaching Nairobi, the same download could take less than a minute and he can move on to other tasks. He has employees who often have to upload files via ftp to servers in the US. With the faster speeds it will make their jobs that much easier. He is not even too concerned about the cost right now, the overarching benefit is well…broadband.

There are other factors such as open access, latency, and reliability, but talking about that would be tantamount to counting chicks before they hatch no?

As always, feel free to chime in with your thoughts in the comments or via twitter if you prefer to be pithy.