Earlier this month I finally got a chance to go to Lagos, Nigeria. It left an indelible mark in my mind. Lagos is a gorgeous city, intoxicating and yes, a little gritty but all in all completely intriguing. Intriguing in its scale, its people, and its location. Free flow of thoughts below on what I learned and observed.

You can either experience the Lagos of possibility or of gridlock. It depends on your mental frame. One of the hosts told me that you can attract your own Lagos. You just need to bring an effortless and authentic personality.

You can either be an Afro-pessimist or an Afro-optimist. Either way, you’d better be hustling.Â  I see several newcomers in Kenya putting down entrepreneurs and regurgitating old stereotypes, even referring to friends in co-working spaces like iHub as ‘monkeys’. (Whole other story that I won’t even get into right now.)

Being in Lagos, I was quite encouraged and happy to see the forward momentum in service provision, infrastructure and even waste management.
I was part of a small group that was given a tour of the Bus Rapid Transit (BRT) system complete with NFC technology for easy payment. The BRT system moves Lagosians quickly through the city in a very efficient manner. The fleet I saw was impressive, not in the shiny super new kind of wayâ€¦more so in a functional, well maintained somewhat old fleet, yet orderly kind of way. The investment in infrastructure is continuing, with a new light rail system that is on course to be opened in 2016.
As you make your way around the city, there are people with orange coats emblazoned with LAWMA. This stands for Lagos Waste Management Authority, which is ensuring that the city is cleaned up and waste is processed. Clearly there is order from the chaos you thought Lagos was wrought and overrun with. 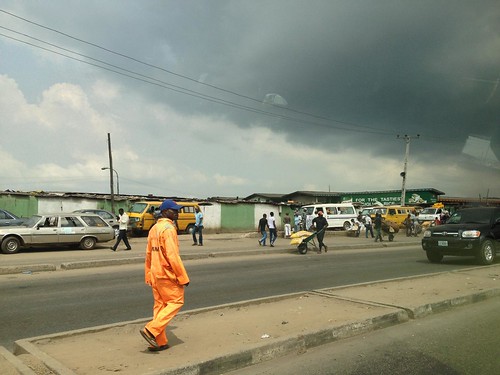 The infrastructure of the mind: This is a key idea that I encountered when Moji Rhodes gave an overview of the efforts by the state of Lagos to not only improve the lives of Lagosians, but to empower them. As is similar in most parts of Africa, there is no escaping the colonial baggage that saddles culture, inefficient legacy systems, land allocation problemsâ€¦the list can go on and on. The infrastructure of the mind alludes to the cultural renaissance that I think needs to be fostered even more. It is as essential as economic growth in the betterment of African cities. Lagos is ahead in this regard.

What remained in my mind most of all is the immense potential to leverage technology in the service of citizens. EIE – Enough is Enough Nigeria, Sahara Reporters, CCHub, Wennovation, and so many other examples of initiatives that will be integral to helping Lagos youth to engage, have a say and to give back.
I am reminded of the seminal quote for 2012
The role of citizen does not end with a vote – President Barack Obama during his acceptance speech.
How can we set up end to end systems that help citizens beyond elections?
In the case of Lagos, there is potential of impacting almost 8 million people with information services. I am awe struck by the immense opportunity and hats of to the people already investing their time and energy to doing this.

The larger question that I think many cities are trying to answer is how can cities provide services in order to draw the creative, maker, entrepreneurial class? Small and medium sized businesses still power many economies. In Africa, it becomes even more important to invest in growing this segment of the economy. I saw many MTN Mobile money ads, this is likely to be a major growth area for Lagos.

I am curious about culture based design in African cities. From architecture of technology systems that can provide utility and help tackle the unique problem sets of Lagos and Nairobi. Perhaps just effective design in a global sense needs to be applied to the many problems of a complex, growing, vibrant city like Lagos. There is lots to learn, but more so, I think there is so much more to do to connect innovators globally to the important problem sets on the ground. The hard work is of course the end to end workflow of making sure we do not just think of the tech, but the Technium and the ecosystems of the future. The most famous example of a truly unique, effective and Lagosian ecosystem is ofcourse Nollywood.

Through music and fashion I saw glimpses of even more ecosystems being redefined right now in Lagos.

In the case of Kenya, fibre has been laid by companies such as Kenya Data Networks for communication within the country. The problem has been connecting Kenya to the rest of the world. That is where the bottleneck has been. The government of Kenya has been laying cable in many parts of the country, so is just a matter of time before high speed internet access is made available to urban areas and even smaller towns.

Do note the VSAT connections can have broadband-like speeds, so what we should look at is the connection costs and amount of bandwidth available.
For example, an E1 line (equivalent to the American T1) of 2 Mbps to ISPs costs 4000 USD in Ghana, Benin, Nigeria, 7000 USD in Kenya, Tanzania and Uganda, 32,000 USD in Cameroon, 25,000 USD in SA.

In residential access Telkom Orange charges about 5990 Ksh (approx. 75 dollars) for home access line of 256 kpbs downloads and 128 kpbs uploads per month. Many people use the Huawei wireless modems E220, E160 particularly in Nairobi with the 3G connections, utilizing a pay-as-you-go plan. Kenyan readers, how much do you pay for your internet access? what kind of speed do you get? Do you have a preferred service provider?

By and large, broadband access is very expensive. There are also other projects like TEAMS and EASSY (Quasi-Govt. consortium: Telkom Kenya/Orange is a member, as is Safaricom and Econet) that plan to connect parts of Africa to the rest of the world by Fibre optic Cable. So far SEACOM has arrived first and the prospect of having more competition could result in the cost coming down. Though that may indeed take time. For now, companies herald the arrival of SEACOM’s fibre optic line because it would mean an increase in productivity for businesses that depend on the internet. For example, there is a young businessman in Nairobi with an IT outsourcing company, with his relatively decent connection, he still has to wait for more than 5 minutes to download a 26MB file. In a few months with the SEACOM cable reaching Nairobi, the same download could take less than a minute and he can move on to other tasks. He has employees who often have to upload files via ftp to servers in the US. With the faster speeds it will make their jobs that much easier. He is not even too concerned about the cost right now, the overarching benefit is well…broadband.

There are other factors such as open access, latency, and reliability, but talking about that would be tantamount to counting chicks before they hatch no?

As always, feel free to chime in with your thoughts in the comments or via twitter if you prefer to be pithy.